I have been working hard to create profiles for slic3r that allow you to print almost any object at high resolution with ease. This means setting up reasonable speeds to allow almost any geometry to print successfully without the intervention of the user to tweak settings based on the model. This includes sane retract lengths and speeds to allow small parts to print without lumps or ooze which was not always easy with a bowden cable type machine. This issue is far less of an issue today as it was 1 year ago due to the developments in hotend design and software (firmware and slicing). The J-head hotend used on Tantillus requires a lot of pressure to extrude which allows us to use retract to simply lower the pressure enough that it is below the pressure required to print but still high enough that we do not have lag when we begin to print again after retraction. The first few profiles are almost complete and will be posted soon but I thought I would share with you some of the results.

All of the following were printed at 100 micron layers (default 150) and have had no post processing.

Posted by Sublime No comments:

I just wanted to quickly let you know a little more about the cable drive. I know some people are unsure of its abilities so let me put those worries to rest.

The reason I went this route was to create a system that does not require special belts that are unavailable in the retail world for the most part. I also wanted to eliminate the problems found with belt driven systems like backlash from the rubber compressing or bumps from the teeth going over the idler pulley. This lead me to a cable drive system like found on a plotter or scanner. Growing up in the marine world I was familiar with roll-on roll-off winches and hoists so I knew the system could apply a lot of force and would not slip.

A lot of people have asked how it works and I have tried to explain in the instructions on Tantillus.org but it will only be clear once I make the videos during the assembly of the machines from the Indiegogo campaign. I will try and explain it here as well.

The two rods with the drive gears on them have holes drilled at each end to allow the cable to pass through them. The cable is then wrapped 5 times on either side of the hole in opposite directions to allow it to roll-on and roll-off but only up until the fixed point where the hole is drilled. This fixed point is what makes the system solid and prevents any slippage. We are only actually un-wrapping the cable 2 wraps in either direction and the other three on each side are to further give traction to the cable and creates an offset in the two lines that allow the cable to pass by the X/Y end. We then need to wrap the cable around the rod on the opposite side (idler side) 7-10 times to get the offset on that side as well so it lines up correctly. Then one of the cables goes through the X/Y end and through a loop in the other end of the cable and back through the X/Y end. This allows you to simply pull the end of the cable and it cinches tight. You only have to tighten the one bolt in the X/Y end to secure it. This makes it easy to align the bars as you just undo the one bolt and move the X/Y end which has the cable running through it and then re-tighten the bolt when square.

The cable I have chosen to supply with the kits on Idiegogo is a braided high test fishing line from "Power Pro" and is made of 100% spectra fibre. I did some testing with wire rope and it should work but I have not done enough testing to make any solid conclusions as it may fatigue over time. But for those of you wishing to try it is usually called stainless leader line and is sold in some fishing stores.

The spectra fibre is incredibly strong, but why should you believe me. This is what the manufacture Honeywell says about the fibre.

"Pound-for-pound, it is 15 times stronger than steel, more durable than polyester and has a specific strength that is 40 percent greater than aramid fiber. Polyethylene is a remarkably durable plastic, and scientists at Honeywell have captured the tremendous natural strength in the molecular backbone of this everyday plastic to create one of the world's strongest and lightest fibers.

These properties have lead to Tantillus having no detectable backlash and very accurate steps per mm. Giving Tantillus amazing layer alignment as seen here.

Note:These photos were taken with a microscope and are of 0.2mm layers and 0.25mm. 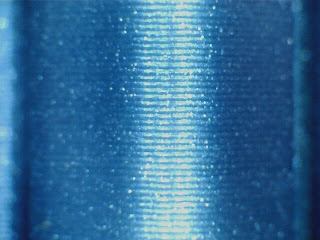 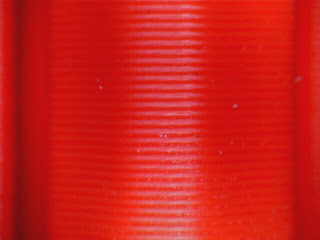 All of this results in a system that has surpassed my own expectations and hopefully yours.
Posted by Sublime 5 comments:

I would like to start off by apologizing for the lack of updates over the past 2 months. I was planning on being at this point a long time ago. But as with most projects there have been hurdles to overcome.

To be able to spend the amount of time I would like in the development of RepRap related designs and stuff to be printed I have decided to open a store to sell Tantillus parts, kits and machines. To kick things off I've decided to go with an Indiegogo flexible funding campaign with perks from $15 to $2000.

Introducing the Laser cut acrylic edition of Tantillus. It uses the exact same axis parts and electronics as the fully printed version. The hardware requirements are less than that of the Printed version as the Laser cut case does not require any bolts to assemble. It measures 10mm wider and deeper than the printed version while standing the same height. It has additional cutouts for a 16 x 2 LCD, rotary encoder and barrel connector for the power. It has mounting holes for Arduino mega based electronics (RAMPS) as well as Sanguinololu. 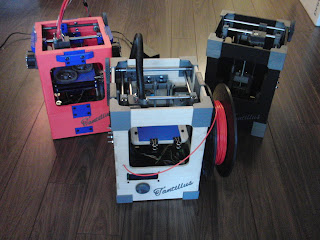 After building a few wooden machines cnc'd by Derek at ArmyOfEvilRobots and making hundreds of small revisions to make assembly easier and reduce vitamins I was finally ready to have the first Acrylic case cut. This is the version available through the Indiegogo campaign and being released to the community.

In addition to designing, building and testing I have also been busy building a dedicated website for Tantillus with what is (will be) the best documented instructions in the RepRap community. I have also created a custom branch of Marlin just for Tantillus with many special features like: Automatic fan control, LCD backlight control, Better support for 16 x 2 LCD, "Easy load" for loading and unloading the filament on bowden cable machines from the LCD as well as many other features.

I have decided to release the files under the GPLv3 in the true spirit of opensource and the RepRap project. To do so I have created a Github repo for Tantillus and uploaded the printable case files for those of you who would like to get a head start on printing the case. The rest of the files will be released (including source files) the day the Indiegogo campaign ends.

For the rest of the details please see the Indiegogo campaign and Tantillus.org
Posted by Sublime 1 comment: